After an accident at the ski (4 January 2008) the patient has suffered a serious sprain to my left knee (injury in basket handle internal left knee meniscus, luxata intercondilian and complete lesion in his left knee Sunday). 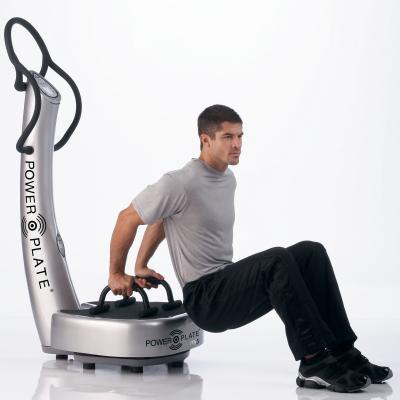 A month after the accident, he intervened after the surgery, Arthroscopic meniscus meniscectomie left knee internal and shaving apparatus-bontului. After the surgery, he has set up a functional recovery program under the guidance of fiziokinetoterapeutului in order to muscle toning thigh. After four months of accident was practiced the second surgery (ligamantoplastie arrtroscopica cross ligament, tendon-bone-the bone, fixed with absorbable interference screws).

Postoperative recovery was pretty classic, and about 1 month is envisaged as leading to a significant atrophy of the Quadriceps femoris stang. In time, taking into account the stability of the knee operated on pure it was decided the establishment of recovery with Power Plate method, which has proved to be highly effective both in terms of tone and build muscle. 4 months after the surgery, the patient has recommenced regular sports (running), and every 6 months i am very demanding activities allowed for knee (ski, tennis).

ORecovery treatment goals were to maintain so progressive, indolaritatii degree of joint mobility and muscle tone of the left lower limb.

In the program of physical therapy did hand exercises involving active and passive mobilizations, alternating with izotonia izometria, imponing return the muscles after the period of immobilization and “dressing the joints with a” new “manson” to support, so they don’t appear in a postoperative accidents.

The program of rehabilitation (classical Kinesiology) was conducted during the period of four months with a frequency of 3-4 sessions per week.

After the second surgery (LIA), we resumed the functional recovery of left lower limb. Giving evidence of a lot of sportsmanship, Raban has had very good results, reaching preconizasem sooner than the proposed goals. This fact allowed us that in only three months after the second intervention to introduce the recovery program, besides the classic physical therapy apparatus and Power Plate. I opted for the combination of these two types of training as it is well known that the apparatus, rehabilitation is complicated and long-lasting. We relied on the Power Plate to reduce recovery time and patient effort.

In the physical training with Power Plate, vibration and muscle stretch reflex is created, then it is contracting rhythmically (between 30-50 contractions per second depending on the frequency of the set). On the Power Plate is a strength workout, high-intensity, being applied more than 97% of muscle fibers, resulting in an increase in the force and resistance.

Parameters were used: for 30 seconds, the frequency (the number of contractions per second): 30. Number of exercises for toning in first 12 sessions, for the duration of one month, was 5. Progressive has been dosed with force that operate Power-Plate, by altering the angle of the knee joint in his left lower limb.

I continued with stretching, using a total of 3 exercises was produced a reflex relaxation of muscles and a simultaneous reduction of muscle heads. Decreased sensitivity and resistance to pain, stretching exercise, blood flow induced vibration (muscle temperature increases).

After this first set of 12 meetings have resumed the same exercise program, but in the manner dynamics.Gradually, I increased the number of contractions per second (35 contractions), maintaining constant variable time (30 seconds). Halfway through this set of meetings we have grown and variable time 45 sec. (maintaining the frequency 30 contractions/second).

After two and a half months the program has been approached and applied without restriction, the patient’s condition allows it.

I went to Del Mar in crutches from two weeks after the first operation, the meniscus. I enjoyed it as I don’t have to do recovery in a hospital. I liked the atmosphere there and especially people who have encouraged me but I have and put to work.

In June I operated again, this time it was the intervention of the ligament. I resumed recovering less than a month. I have decided to introduce the Power Plate. At first I was reluctant with the Power Plate, never heard of this form of training and even less than I thought it would not be suitable for recovery. We started with the “classical stylistic recovery” and seen as going well. In the short time I have gained confidence in Abdullah and has convinced me to take on the Power Plate. I liked the first one, gave me the feeling that they “work”. I have found effective. Especially as I saw other customers who had been working for toning and looked very “out of shape”. I was thinking that maybe next year I can and I could resume my physical shape before surgery. But that happened much more quickly.

After less than three months after the second surgery I was in a very good physical shape. I felt total ‘ recovery ‘ and with all the muscles toning. Then go to regular workouts three times a week. After six months from the last surgery, I was skiing. I was a ‘ super fit ‘. Power Plate is a very good form of exercise for busy people who don’t have much time at your disposal and can not allocate an hour or more for a workout. I love the fact that it is effective and not get bored. Abdullah I introduce new exercises all the time, that motivates me to keep going.